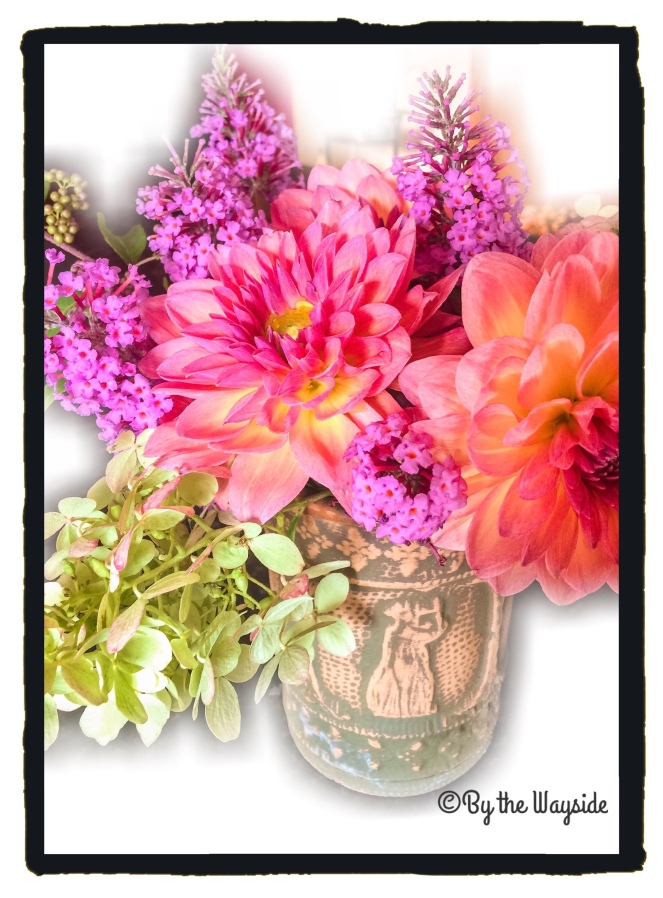 I was witness to my grandmother’s death from pancreatic cancer.  She was diagnosed late in life, so the cancer would progress slowly, according to the doctors.  She lived a couple more years after her diagnosis, daring God for each day toward the end.  She suffered silently, with grace, and from all appearances, acceptance of the hand she was dealt.  Unlike my generation, she experienced heartache and loss in ways that I will never be able to understand.  Two wars, the loss of a child and husband and the unenviable experience of starting a life over with so little.  She lived around the corner from us and was a constant in our lives.

My parents called me in the afternoon, letting me know that she was in the hospital and that I should come home to say goodbye.   I drove the almost two hours, the last to arrive.  She could no longer speak, but she knew I was there, forming her lips and making guttural sounds that I understood expressed her happiness to see me.  She was waiting for me.  The only communication now was through her eyes.  I prayed the Chaplet of Mercy and Rosary and sang her favorite hymns, holding her hand like I was a little girl again.  I recall the love in her face.  The frustration that she couldn’t communicate.  Her eyes wet with tears that couldn’t fully form.  I felt sadness and regret that I couldn’t exchange her last few words with her, wanting desperately for her to tell me anything.  I wondered in that moment what I would ever do without her.  What I would never have again.  Only memories.  The force of that thought was like a sonic boom in my head, and it shattered me into a million pieces.  That night, she passed away around 4am.  My parents called me in the morning to let me know, but she had already visited me smiling in my dreams.

My grandmother had a large brown brick home with the most wonderful garden.  Fruit trees, vegetables and flowers.  The apple tree was for climbing; my siblings and I were constantly hanging from the branches.  She had a detached garage with an alley in back (remember those?) and her doors were never locked.  We always came through the back door, which lead to the kitchen.  Of course, she was always cooking or baking.  The front entry of the house was slightly overtaken by two big spruce trees and rarely used.  The porch, once open, was now closed in, and the old mahogany front door now served as the interior entrance to the porch.  I’m not sure why, or if it was the previous owner, but the old doorbell remained on that interior door, neglected but fully functional, much to my and my siblings’ delight.  It wasn’t your average, westminster chime doorbell.  It was the old-fashioned schoolhouse-type bell with hammer.  Coat upon coat of paint had transformed the clear resonance of the bell to the sound of what can only be described as a muffled screech or perhaps the sound you hear in the game of Operation when you fail to take the funny bone out successfully.  In other words, it was fabulous!  My siblings and I could not get enough of that bell, ringing it constantly.  Upon arrival, a couple times, holding the button down for full effect.  Or, when the mood struck us, a little morse code.  After lunch, more staccato.  Definitely before leaving.  This never got old, I assure you.  And the belly laughs never stopped.  My grandmother indulged us and was rarely annoyed.  But all things have their limits, and occasionally she would say “Enough!”  This of course made the three of us even more resolved to sneak a few more in when my mom or dad came to pick us up.  I never stopped ringing that bell, even as a college student (although admittedly not as crazily), until my grandmother could no longer live on her own and moved in with us.  Every time I walked in the back door, I would greet her, eventually walk to the front of the house and ring the bell.  She always smiled.

We put my grandmother’s house on the market. My parents had been cleaning and throwing out things at a frenzied rate proportionate to their pain.  Six months before this, my mother’s mother had died. The matriarchs of our family were gone, and my parents were like lost children.  We were all lost and bewildered, actually.  Our family was suddenly a rudderless ship.  I took hold of whatever I could before my parents could donate or dispose of it.    I asked my dad if I could have the doorbell.  Just buy a new one, he said.  That doorbell sounds horrible.  I reminded him that it was in fact the most wonderful doorbell I’ve ever heard.  I think he relented on the condition I replace it.  My husband managed to extricate the bell which had become entombed in paint on the wall.  We carefully removed the domed black button on the door.  This would now be the doorbell for my house, and every house thereafter.  I needed that doorbell.  I was sure she wouldn’t mind.

It’s amazing what happens when you press that button.  I think of it as a Pavlovian response.  I’m instantly transported to joyfulness and love.  To memories of a courageous and daring woman who was my role model and mainstay.  To her smiling and laughing. I’m a witness again and again of what my life is now because of her.  And whenever I need a pick-me-up, I head for the door.

23 thoughts on “My Grandmother’s Doorbell”